Accompanied by a stellar line up including Michaela Coel’s I May Destroy You and the period classic The Crown, Mystery Road Season 2 has been nominated for the International AACTA Award for Best Drama series.

Voted for by AACTA Members,  Best Drama Series is one of four new categories at the 10th  International award ceremony.

Mystery Road star Aaron Pedersen, who plays the role of outback detective Jay Swan, has been nominated for Best Actor in a Series. 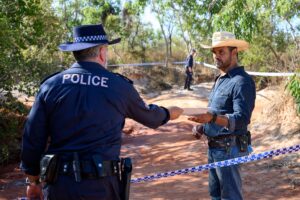 AACTA CEO Damian Trewhella said: “2020 was an extraordinary year for the global screen industry. We all experienced varying degrees of lockdowns but one thing that united us all was the enjoyment and escapism we got from film and television and audiences devoured content in astonishing numbers. Shows like Normal People, The Crown, The Mandalorian, I May Destroy You and Schitt’s Creek were watched across the world and our own productions like Mystery Road stood up alongside the best.”

AACTA will produce a highlights package of acceptance speeches which will be available to watch on AACTA’s YouTube channel on Saturday 6 March AEDT / Friday 5 March PST.